← more from
Father/Daughter Records
Get fresh music recommendations delivered to your inbox every Friday.
We've updated our Terms of Use. You can review the changes here. 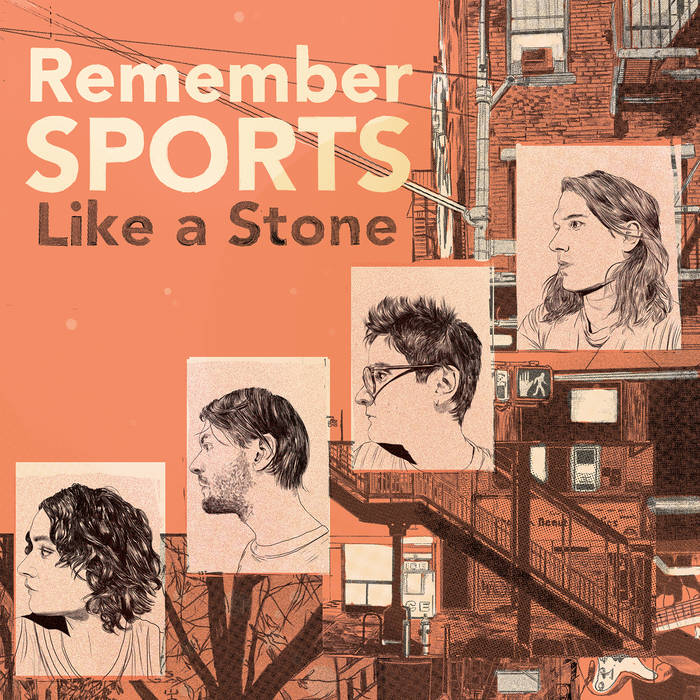 Donald Deeley This album gives me the same sense of discovery and exuberance I felt when I heard Jagged Little Pill in 95, that sense of, "Oh, this is what I've been wanting from music all this time." Favorite track: Out Loud.

alicejblank thanks for releasing music like clockwork every time i'm going thru a breakup y'all are the best at gettin me through it Favorite track: Eggs.

brunberg Songs like Pinky Ring and Out Loud really helped me pull through this pandemic. Favorite track: Out Loud.
more...

Remember Sports was a self-categorized “basement rock band” when they formed as a group of Kenyon College students in 2012. The band’s electrifying pop punk bonafides and the inimitable vocals of frontperson and primary songwriter Carmen Perry found them quick acclaim and a home at Father/Daughter Records. 2018’s Slow Buzz, their first as Philadelphians, saw a new lineup of the band collaboratively writing, building depth and elaboration to their compositions and production. Heavy touring alongside high-energy art punk heroes like Jeff Rosenstock and Joyce Manor brought their tightly synced playing to a stronger level, while headlining dates supported by favorite artists like Lomelda, Trace Mountains and Pllush inspired them to embrace meandering flourishes in their songs. When they came off the road, they were ready to write, entering a meticulous pre-production and demoing process, rehearsing in sectionals to help every moment blossom. Like a Stone, the result of that work, contains some of the smartest performances and arrangements in contemporary indie rock. While they’ve maintained the warmth and immediacy that made the quartet so beloved when they first connected to one another years ago, it’s hard to imagine songs this huge relegated solely to the basement.

Remember Sports’ third album for Father/Daughter builds on the promise of their last, with an elevated sense of space and sound. Taking a multi-instrumental approach, the band members—bassist Catherine Dwyer, guitarist Jack Washburn, drummer Connor Perry and guitarist and singer Carmen—traded instruments throughout, resulting in biting bass-and-drum grooves, entrancing percussion layers, saturated synths and drum machines, and found sound minutiae from Connor’s circuit-bent electronics the band calls “evil items.” Carmen’s singing, meanwhile, even more expertly turns on its heel from pop-perfect vocal runs to squirmy sneers. “I like mixing the pretty and polished with our vibe, which is more detuned and discordant,” says Carmen of their distinctive approach.

Remember Sports’ most influential rock forebears make compelling reference points, from the interlocking guitar sophistication of Built to Spill, the eclectic pop snark of Rilo Kiley, the blown-out might of Sleater-Kinney’s The Woods, and the catchy intimacy of Yo La Tengo, who the band went to see together on a tour field trip. Former tourmates also provided inspiration, especially Nadine, whose Carlos Hernandez and Julian Fader engineered and mixed the album while frontperson Nadia Hulett provided backing vocals. Catherine describes the experience of working with proper analog outfittings as “thrilling” and used the studio environment to channel another of the band’s co-writing heroes: Fleetwood Mac. “I love Tusk and tried to copy the lovely straight into the console tone they get on some guitars on that record,” she says. “I love when a guitar sounds like it has absolutely no air around it at all.”

Remember Sports have written through breakups before, but Like a Stone is instead about breaking away from old versions of yourself. Carmen rummages through feelings of doubt and spins them into an imperative to treat herself more kindly; her experiences growing up with Catholicism and later studying religion, as well as living with an eating disorder, provide a visceral lens for the literal blood-and-guts self-scrutiny she writes through. “Like a Stone references something that's slipping away, or sinking down into your brain to a place you can't find,” Carmen explains. “The hard songs are guilt and anger coming out of me, and the soft songs are forgiveness.” Repetition, both musically and lyrically, represent the negative thought loops that come alongside mental illnesses. “Do something right, just do anything right”—a refrain at the end of hard-edged, frenetic “Easy”—becomes a polar star thesis that Carmen returns to as a countermelody on “Materialistic.” A gorgeously anxious ballad about avoidance, that song provides a plaintive centerpiece at the end of Side A, as well as an astonishing outlet for Jack’s time-bending, scale-redefining guitar solos.

Despite its sometimes heavy themes, Like a Stone’s twelve tracks riff better than your very best memories of MTV, and never quibble about shifting genres when it suits the song. Gates-storming opener “Pinky Ring,” road-tested by the band on its headlining 2019 dates, takes a teasing schoolyard melody and pairs it with bright tambourine. “Eggs'' and “Odds Are” show off Nashville licks and croon-along vocals respectively, drawing from Carmen’s childhood love for Tejano music and country, including her uncle’s band Los Jackalopes; the latter has one of the album’s best examples of her darkly funny lyrics when she asks, “Why’d you lick those tongs - the ones you just got raw meat on?” With gated drums reminiscent of an aughties pop highlights comp, “Out Loud” sees the contributors trading lead vocals over portamento synth scoops, resonant strums and even bongo overdubs from Connor. “Carmen got to go full Ariana Grande,” Jack says of the diva-leagues vocal chops on display, “and the whispering she does on that last chorus is one of the most special moments on the record for me.” “Flossie Dickie,” composed by Catherine, nods to the band’s punk roots with untethered fretboard acrobatics. And “Coffee Machine,” with music written by Jack, manages to meld easy organs, muted surf guitar, and aloof group harmonies in an eerily cozy 39 seconds.

Unexpected section changes abound, but are never inscrutable; these songs reward repeat listens to unpack every exacting hook. They’re about insecurity, sure, but they’re also about optimism—emerging from an intrusive thought with a new way to perceive and care for yourself, represented in spectacular denouements made possible by the closeness between the band members. “We’ve grown up together and grown to trust each other,” says Carmen. In recording, Jack felt drawn to music that’s “communal and loud and cathartic, but also kinda confidential and private. I hope we achieved something similar, where you can hear the influence of each of us in the album.” Carmen seconds that; “It feels seamless. To me, Jack and Catherine’s writing feels like an extension of my own.” If Like a Stone is an exploration in treating yourself with more generosity, it’s an encouraging example, and also a representation of the magic that can happen when you surround yourself with people who love you—especially when you lose sight of how to do that for yourself.